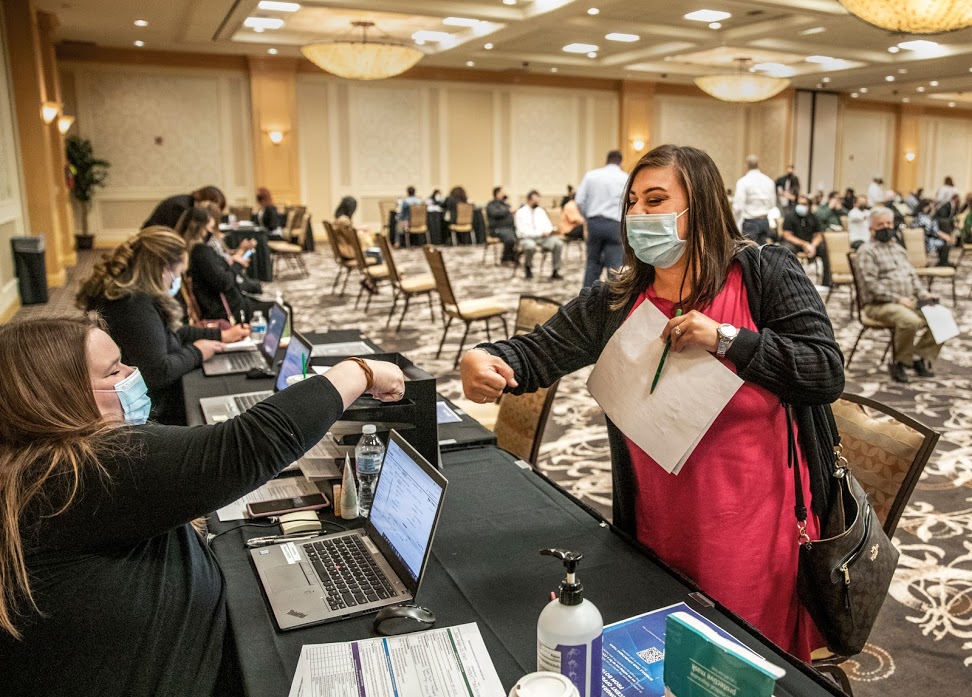 Welcome to the 10th installment of “Economic Crossroads,” a recurring feature formerly known as “Road to Recovery” that provides semi-regular updates on Nevada economic news and data. We modified the name earlier this year to reflect the changing economic conditions. Find the latest Nevada economic data here.

In recent months, markers of the current economic conditions have grown impossible to miss — “now hiring” signs fill storefront windows, hours may be abbreviated at your favorite restaurants and commercials advertise special discounts in the face of inflation.

Even as federal efforts to bring down inflation have been slow to curb increasing costs, the tight labor market has benefitted workers seeking new or improved jobs. But amid constant “recession” chatter from economists and news outlets, the employment situation is likely to worsen as borrowing costs continue to rise.

In July, when news broke that U.S. Gross Domestic Product (GDP) shrank for a second consecutive quarter, fears that the country had entered a recession grew among consumers and economists. Using an unofficial definition of a recession — two consecutive quarters of GDP declines — some economists claimed that the country had entered a recession, but with unemployment at a historically low level, the economic picture appeared more complicated.

Though lower-income consumers are suffering from the steep rise in prices over the past year, particularly for food and fuel, the job market remains strong, and the country has not officially entered a recession.

Still, predictions about whether one will come, or when it will happen, vary wildly based on economic models and who is providing such analysis. Last month, Bloomberg economists forecast the probability of a recession by October 2023 as 100 percent.

But in Nevada, several economists forecasting the economic future expressed greater optimism about the chances of a recession. That includes Emily Mandel, an economist at Moody’s Analytics, who spoke to members of the state’s Economic Forum last week, and Stephen Miller, research director at UNLV’s Center for Business and Economic Research (CBER), who presented last week at CBER’s fall economic outlook event.

“We’re not predicting a recession,” Miller said. “That doesn’t mean there’s not a recession risk.”

Below, we further explore their predictions for the national and local economy, alongside data on Nevada’s economic conditions.

Recession possible, but not certain

While inflation remains high, the Federal Reserve has worked to bring down prices by raising benchmark interest rates without doing so too quickly or severely in a way that could send the national economy tumbling.

This year, all measures of inflation — including the annual change in the Consumer Price Index, sometimes referred to as the annual inflation rate, which fell to 7.7 percent in October — are well above the Fed’s benchmark goal of 2 percent annually. That has put the Fed in a precarious position as it works to reduce inflation. Miller has often described the Fed’s position as being stuck between a rock and a hard place.

“The rock is inflation, the hard place is a recession. How do they manage to move the economy and reduce the inflation rate, and do so without creating a recession?” he asked.

To bring down inflation, the Fed raises interest rates, which broadly makes borrowing money, such as in the form of a mortgage or auto loan, more costly. This is meant to reduce demand, as supply chain issues coupled with a sustained high level of consumer spending have created an imbalance between supply and demand, leading to rising prices for goods.

Though some economists criticized the Fed as slow to act on the climbing inflation rate, the agency has taken aggressive action this year, raising interest rates by 0.75 percentage points multiple times. Rate increases of that size had not been made since the 1990s.

With those steps taken, Mandel and Miller both see economic growth slowing in the coming months, especially in comparison to the rapid growth that came after a deep, short recession at the beginning of the COVID-19 pandemic.

The National Bureau of Economic Research’s Business Cycle Dating Committee is officially charged with defining the nation’s recessions, and the group characterizes one as involving “a significant decline in economic activity that is spread across the economy and lasts more than a few months.”

Though such projections can be imprecise and may change as new economic data is reported, Miller put the chances of a recession at 30 percent in the short term. But he cautioned that a recession could be a self-fulfilling prophecy if consumers are worried about an economic downturn and pull back from spending.

“If everybody thinks a recession is coming, they say, ‘Well, I better cut back on my spending a bit. I’ll increase my savings just to be safe,’” he said. “Then demand falls and that pushes you into a recession.”

Mandel predicted that if the country were to enter a recession, it would likely come “around the middle to the second half of” 2023. And though she added that inflation could drop to 4 percent by next year and 2 percent in 2024, her presentation pointed to multiple scenarios of possible risks to Moody’s rosier economic outlook.

In one case, the Fed pushing more aggressive interest rate hikes could stymie demand and cause a moderate recession, while in another, sustained global conflicts could prolong supply constraints causing stagflation — which occurs when inflation remains high, while economic output contracts, exacerbating the effects of one another and weakening purchasing power.

In Nevada, where the unemployment rate hit a national-high and state record-high of nearly 30 percent in April 2020, job gains have been even stronger. The state has recorded the nation’s highest or near-highest annual employment growth each month this year, and employment levels are at an all-time high of more than 1.47 million jobs as of October. The state’s unemployment rate is 4.6 percent, a historically low mark.

“The Nevada labor market is quite healthy at this time, just like with the national economy, and honestly, even more dramatically in a way, Nevada has bounced back from this recession,” Mandel said.

Though Mandel noted the labor market is “starting to cool a little bit,” she also pointed to a high level of demand for workers.

In September, the national economy recorded nearly 1.8 job openings for every unemployed worker, while in Nevada, that ratio was about 1.5 openings per unemployed worker. With more openings than available workers, some employees have had flexibility in seeking new or higher-paying positions.

“Wage and salary income, in turn, has been driven by the tightness in the labor market that’s put a lot of pressure on wages,” Mandel said.

Moving forward, the economists expect that employment gains will slow alongside the decrease in economic activity, as the Fed continues its efforts to tamp demand.

Even if the national economy does not enter a recession in the coming few years, Miller, the UNLV economist, described the housing market as already being in a recession.

At CBER’s fall outlook, projections for Southern Nevada’s Case-Shiller index, a federal measure of home prices maintained by the Federal Reserve, showed pronounced decreases into 2023 and 2024, with projected dips of 10.7 percent and 12 percent, respectively.

“Sorry folks,” Miller said during the presentation. “Now’s the time to earn your spurs if you’re a broker or a real estate agent. If you can survive this, you’re a real person.”

As for why the housing market may experience a downturn, Andrew Woods, the director of CBER, pointed to the rapid rise in home prices following the brief pandemic recession.

“You should remember housing prices between 2020 and 2022 went up first 27 percent, and then they went up 17 percent,” Woods said during the Outlook presentation. “That’s pretty incredible. So the model’s looking at that and saying, ‘That’s maybe not sustainable for the moment and there’s a little bit of a correction.’”

But even as prices course-correct, economists said, interest rate hikes from the Fed have created additional pressure as mortgage rates have soared following decades in the low single-digits.

Mandel said higher interest rates are “already putting a damper on the housing market.” Last month, the national average long-term mortgage rate hit a 20-year high of more than 7 percent as a result of the Fed’s interest rate hikes.

The increase has coincided with a decreasing number of available homes and home sales, as median sale prices have also declined. In Las Vegas, median home sale prices climbed from just above $300,000 in January 2020 to $345,000 by the end of the year to more than $480,000 by May of this year, according to data from Las Vegas REALTORS. In October, that number fell back down to $440,000.

Those rate hikes, according to the written Outlook report from CBER, suggest that “housing affordability will become less affordable.”