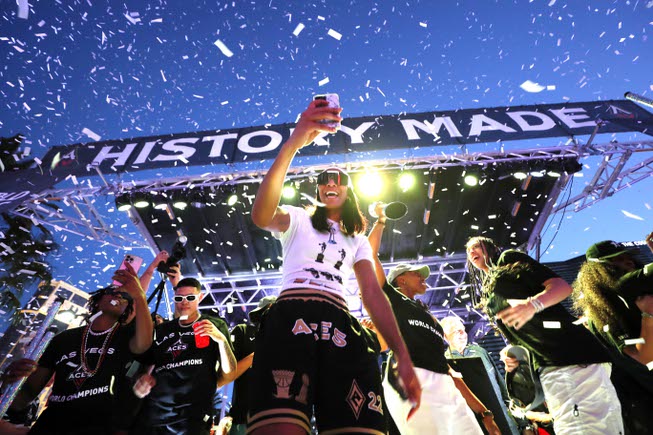 Aces Parade and Rally on The Strip 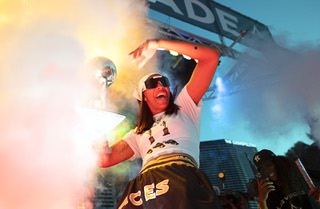 On Tuesday, the city delivered for the Aces, as several thousand fans packed the area around the Bellagio fountains for the team’s historic title celebration.

The atmosphere was one of triumph as the Aces rallied to commemorate the franchise’s victory against the Connecticut Sun in the WNBA Finals.

Two-time league MVP A’ja Wilson was the ringleader among the players, taking the stage with the WNBA championship trophy in one hand and a seemingly bottomless champagne bottle in the other. Finals MVP Chelsea Gray drew “MVP” chants throughout the day, while star guard Kelsey Plum chomped on a giant cigar.

Fans lined Las Vegas Boulevard and packed into a temporary plaza in front of the Bellagio fountains, tossing jerseys, towels and other memorabilia to the players for autographs as the buses carrying the Aces rolled by.

The Aces relocated to Las Vegas in 2018, and in their fifth season, the team posted a 26-10 record, rolling to the top overall seed in the playoffs. They faced off against Connecticut in the Finals, and with Gray leading the way, clinched their first crown with a 78-71 win in Game 4.

“Las Vegas, we are world champions,” Davis said. “I just can’t thank you all enough. Without you, we couldn’t have done it.”

Gov. Steve Sisolak further set the tone for the festivities by declaring Tuesday to be Las Vegas Aces Day.

“It took a group of women to bring the first championship to Las Vegas,” Sisolak said. “We are so proud of these ladies for what they did, not just on the court but off the court. They are role models in our community. Every young gal has to know if you can dream it, you can achieve it, because that’s what they have done, and we are so incredibly proud of them.”

Sisolak then called on Plum to join him at the podium to do her signature dog bark, and the two woofed into the microphone to the delight of everyone in attendance.

Plum then came close to guaranteeing another championship rally at this time next year.

“This is just the beginning,” Plum said. “We’re just getting started.”

Becky Hammon, who was named WNBA Coach of the Year in her first season at the helm, got emotional when talking about her group of players.

“I’m super blessed to be here,” she said. “Thank you for showing up. I got one heck of a roster.”

The turnout for the event was bigger than anticipated, causing the Strip to be closed to traffic shortly after the start of the rally.

Paul and Dannell De La Hoya moved to Las Vegas six months ago and quickly fell in love with the Aces after attending their first WNBA game. They were at Games 1 and 2 of the Finals, and were at Allegiant Stadium for the Raiders game Sunday when they learned, along with the rest of the crowd, that the Aces had clinched the title.

They said they plan to buy Aces season tickets next year.

“This is my first championship parade,” Dannell De La Hoya said. “The whole team is amazing. Gray is a beast on the court, and Plum and Wilson — we love them.”

Nerrisa Raber, 50, has been a Las Vegas resident for 25 years, and she and her son attended 10 Aces games this year. They have already secured season tickets for next year.

When the Aces won the city’s first championship, Raber said she had goosebumps.