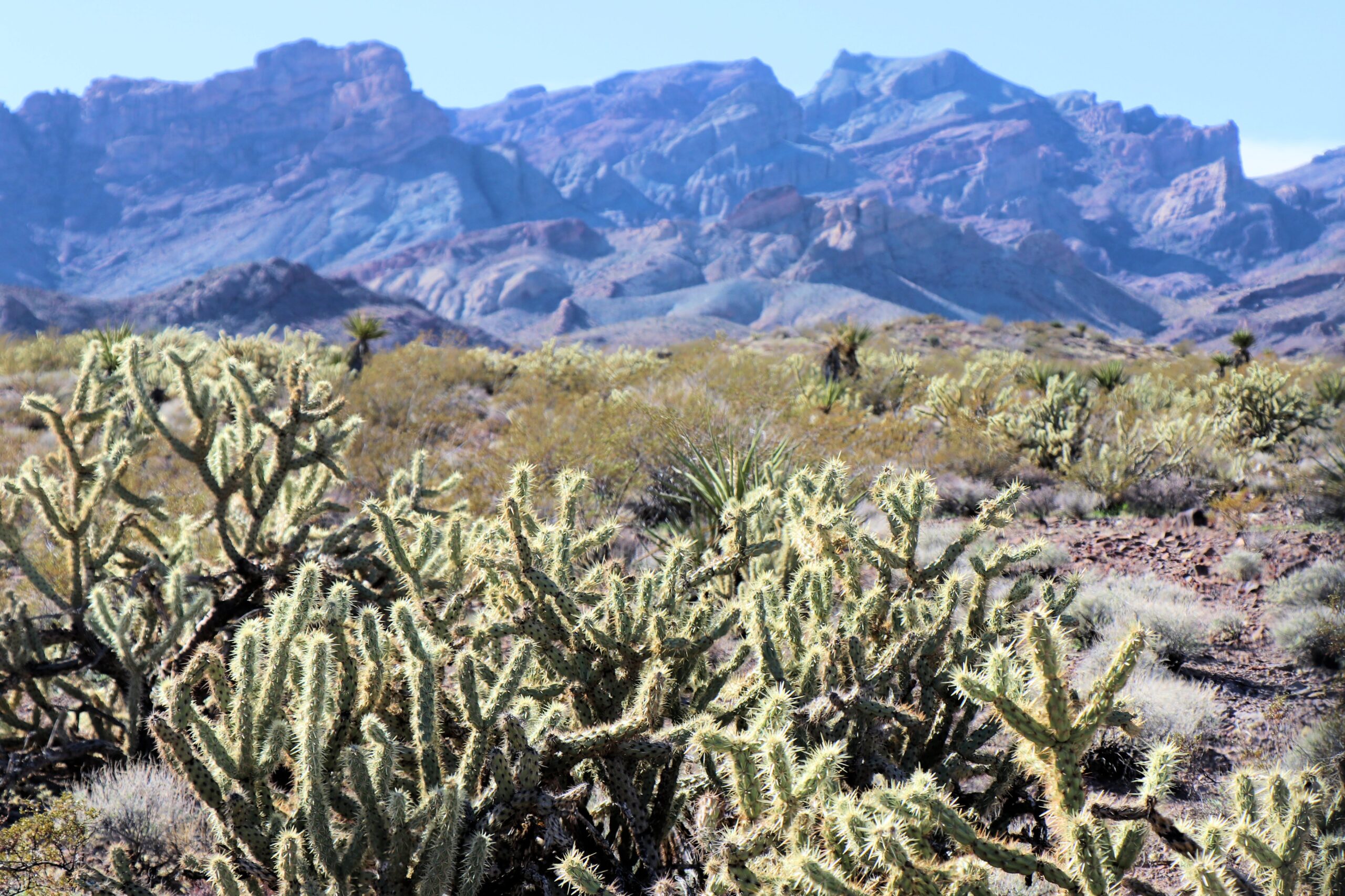 Land within the proposed Avi Kwa Ame National Monument. (Courtesy of Honor Avi Kwa Ame)
For more than two years, leaders of Native American tribes, local environmentalists and Nevada lawmakers have called on the Biden administration to protect about 450,000 acres of land as a national monument at the southern edge of Clark County.

On Wednesday, President Joe Biden answered that call, announcing that he would designate the monument through a proclamation.

The proposed Avi Kwa Ame National Monument will protect sacred land and connect sensitive desert landscapes, spanning from the Mojave National Preserve in California to the Lake Mead National Recreation Area. Avi Kwa Ame, or Spirit Mountain, is considered a spiritual center and a sacred area for 10 Yuman-speaking tribes, in addition to the Hopi and Chemehuevi Paiute.

Linda Otero, a leader with the Fort Mojave Indian Tribe, which pushed for the monument, told The Nevada Independent last year that the land is a sacred place for the Mojave people and Native American tribes along the Colorado River corridor in Arizona, California and Nevada.

“That’s the place of our creation,” she said.

The announcement from the Biden administration, first reported by The Washington Post, was made during a Tribal Nations Summit in Washington, D.C. But it comes after weeks of outreach from the administration. In September, Interior Secretary Deb Haaland visited the area and met with tribal leaders. And earlier this month, top officials at the Bureau of Land Management attended a public meeting in Laughlin, where supporters of the monument presented their case for protecting the land.

“Avi Kwa Ame’s story is one of perseverance and passion,” Rep. Dina Titus, who attended the summit and introduced legislation establishing the monument, said in a statement. “I am pleased that President Biden has listened to Southern Nevada stakeholders, including indigenous leaders, environmentalists, and outdoor recreationalists to protect this sacred land.”

In 1999, the federal government added Avi Kwa Ame to the National Register of Historic Places as a traditional cultural property, but those protections were limited in their scope. A designation of a national monument, supporters said, would provide additional safeguards for an area of the desert that is biodiverse and provides important habitat for the desert tortoise and other species.

At the public meeting, Tim Williams, chairman of the Fort Mojave Indian Tribe, said the proposal was the result of a collaborative effort and a coalition of many varied — and sometimes unlikely — groups and interests, including the towns of Laughlin, Searchlight and Boulder City. He described the area as a place for future generations to have land “free and clear of everything.”

At a Wednesday speech at the Department of Interior, Biden touted his record of using this authority, including his trip last month to Colorado’s Camp Hale, which he designated as the first national monument of his presidency. He committed to making Avi Kwa Ame the second, thanking each of the Democrats in Nevada’s congressional delegation by name and pledging to visit the new monument.

“I’m committed to protecting this sacred place that is central to the creation story of so many tribes that are here today,” Biden said during the summit, drawing cheers from the attendees. “I look forward to being able to visit Spirit Mountain and experience it with you as soon as I can.”

In an interview, Titus said she expects both Biden and Haaland to visit Nevada in the new year to officially sign the designation.

The Mojave Desert in southern Clark County, like many other areas with ample federal public land across the West, are facing increased pressure from development, including large-scale solar and wind projects. Over the past decade, federal land managers have struggled with how to balance conservation priorities and habitat protection with a focus on building renewables.

Jaymee Moore, a councilwoman of the Colorado River Indian Tribes, said it was imperative that the land in the Avi Kwa Ame monument proposal receive protection. Moore noted an increase in development, especially large-scale solar projects, on ancestral lands in California, Arizona and Nevada.

“Our tribes have watched as machinery has destroyed artifacts, cultural sites, left here by our ancestors,” Moore said at the meeting. “We have watched archaeologists gather those artifacts in utility buckets and permanently separate it from the land and to be stored in distinct curated facilities. We cannot sit back and watch development desecrate one of our most sacred places.”

The national monument would include an area that energy company Eolus Vind AB targeted for the Crescent Peak wind project, which federal regulators rejected in 2018. A similar project was again proposed last year, but federal land managers said in 2021 that it was a “low priority” for the agency, citing a variety of cultural resources and environmentally sensitive landscapes.

At the public meeting, Frank DeRosa, vice president of the solar developer Avantus Energy, said he supported creating the national monument. But he called for a minor adjustment in the boundary, avoiding sensitive lands, to allow developers to tap into the grid near Laughlin.

In a statement, Clark County Commissioner Michael Naft applauded Biden’s announcement, saying “we invest in this land not only because it is the right thing to do for future generations, but it is truly the prudent financial move as well. Nevada’s outdoor recreation economy supports 49,000 jobs and generates $3.9 billion for the state in annual economic activity.”

Titus echoed that sentiment, saying the designation would bolster Southern Nevada’s economy, and in particular help the tourism industry – still in recovery from the pandemic.

“A lot of tourists will come for a few days on the Strip to gamble and have fun, but then they like to get out and enjoy outdoor recreation,” Titus said. “[It’s] especially true for international tourists, who want to see what the Wild West is really like. It’s hard to see that on a postcard.”

Although Biden announced his intention to designate the monument, groups are still awaiting a final White House proclamation, which would make the land protections official. The Honor Avi Kwa Ame coalition, in a statement, said “we hope that the final designation respects the original boundaries for the proposed monument put forward by the Tribes who have led this effort.”

“We eagerly await further communications from the White House and Interior Department to finalize this designation and see through this campaign to protect this sacred area for future generations,” said the coalition, which includes tribes, local residents and conservationists.

This story has been updated to include comments from Rep. Dina Titus.