Nevada looks to conservation as the Colorado River dwindles

Dry cracked land that was once under water at Lake Mead Marina is visible on Thursday, Aug. 4, 2022. Negotiations over the Colorado River have become increasingly difficult for the seven states that rely on the shrinking river and its reservoirs, including Lake Mead, which is dropping to critically low levels.

Only a few miles from the Las Vegas Strip, in the Mojave Desert, is an unlikely scene: A county park with walking trails and thick vegetation that circles a vibrant rush of flowing water.

Known as the Las Vegas Wash, the water running through this channel is a crucial part of how Nevada has managed to keep its net Colorado River use below its allocation, despite booming population growth and two decades of persistent drought, worsened by a changing climate.

Every time a shower or a faucet is turned on in Las Vegas, the water flowing down the drain is treated at wastewater plants and recycled. The treated water is discharged into the wash, which flows into Lake Mead, a declining Colorado River reservoir held back by the Hoover Dam. Once there, the water can be used for a second time, effectively increasing Nevada’s overall portfolio.

“It allows Las Vegas to exist in its present form,” said John Hiatt, a conservationist who sits on a coordination committee for the wash. “(Without it), we’d be half our size and really struggling.” 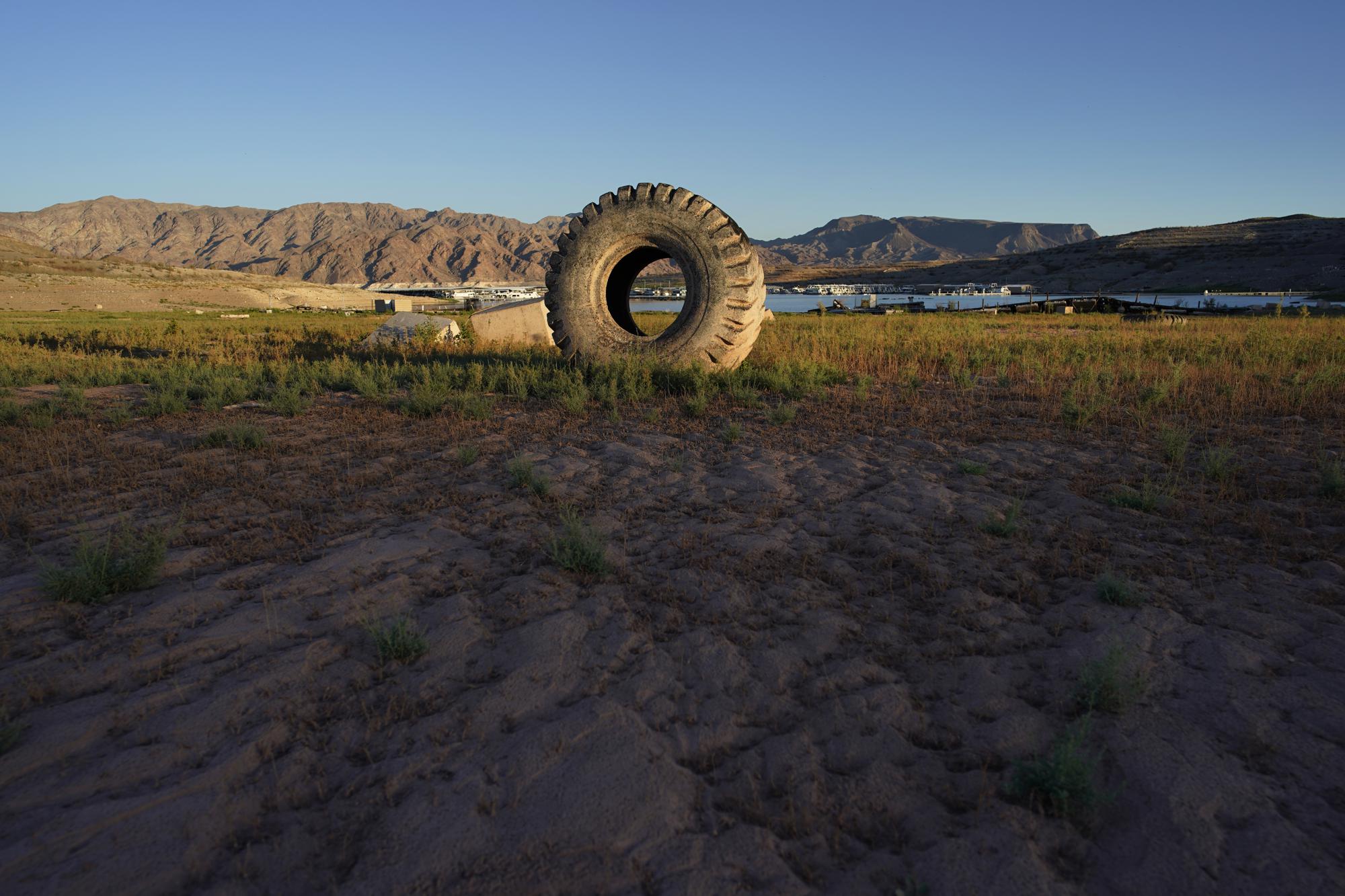 A truck tire once in the water as part of a marina sits on dry ground as water levels have dropped near the Callville Bay Resort & Marina in the Lake Mead National Recreation Area, Tuesday, Aug. 30, 2022, near Boulder City, Nev. (AP Photo/John Locher) 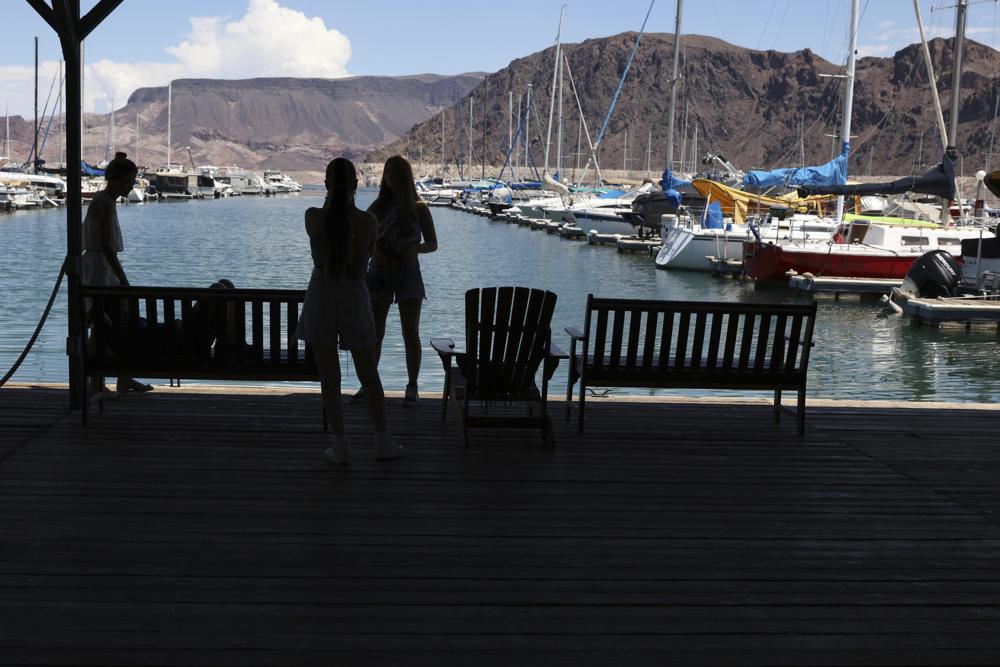 Visitors to Las Vegas Boat Harbor stand on the dock on Wednesday, Aug. 17, 2022. Unlike other states of the Colorado River Basin, Nevada has one main river user: Las Vegas. (Jeff Scheid/The Nevada Independent via AP)

When the Colorado River Compact was negotiated in the early 1900s, only about 5,000 people lived in Clark County, home to Las Vegas. Few envisioned the massive growth that has turned the desert into a sprawling paved landscape of nearly 2.2 million people — and growing.

Accordingly, the compact gave Nevada the smallest cut of the Colorado River: 1.8 percent, or just 300,000 acre-feet (an acre foot is the amount of water needed to fill an acre to a depth of one foot). The small share has meant Nevada has long had to live on a tight water budget and rely on conservation measures that are only now being considered by other Western states.

Unlike other states, Nevada has one main river user: Las Vegas.

It is responsible for more than 90 percent of the state’s diversions, with additional water going to the Fort Mojave Indian Tribe, whose rights were recognized in a 1963 Supreme Court case, and other small water users.

For decades, Las Vegas has relied on wastewater recycling and removing water-guzzling lawns to stretch and conserve its small Colorado River share. But even with proactive management, it could face significant challenges and uncertainties when it comes to future population growth.

“We still have some room with the water resources we have today,” said Assemblyman Howard Watts, a Democrat who has worked on water issues for years, including in the Legislature. “But eventually we’re going to reach a point where we’re going to go past that limit and that’s when we really have to consider what a sustainable path is for Southern Nevada moving forward.”

Many of the Southern Nevada Water Authority’s future planning scenarios are premised on an ability to collaborate with other states to augment Las Vegas’s current supply. Yet negotiations over the Colorado River have become increasingly difficult for the seven states that rely on the shrinking river and its reservoirs, including Lake Mead, which is dropping to critically low levels. 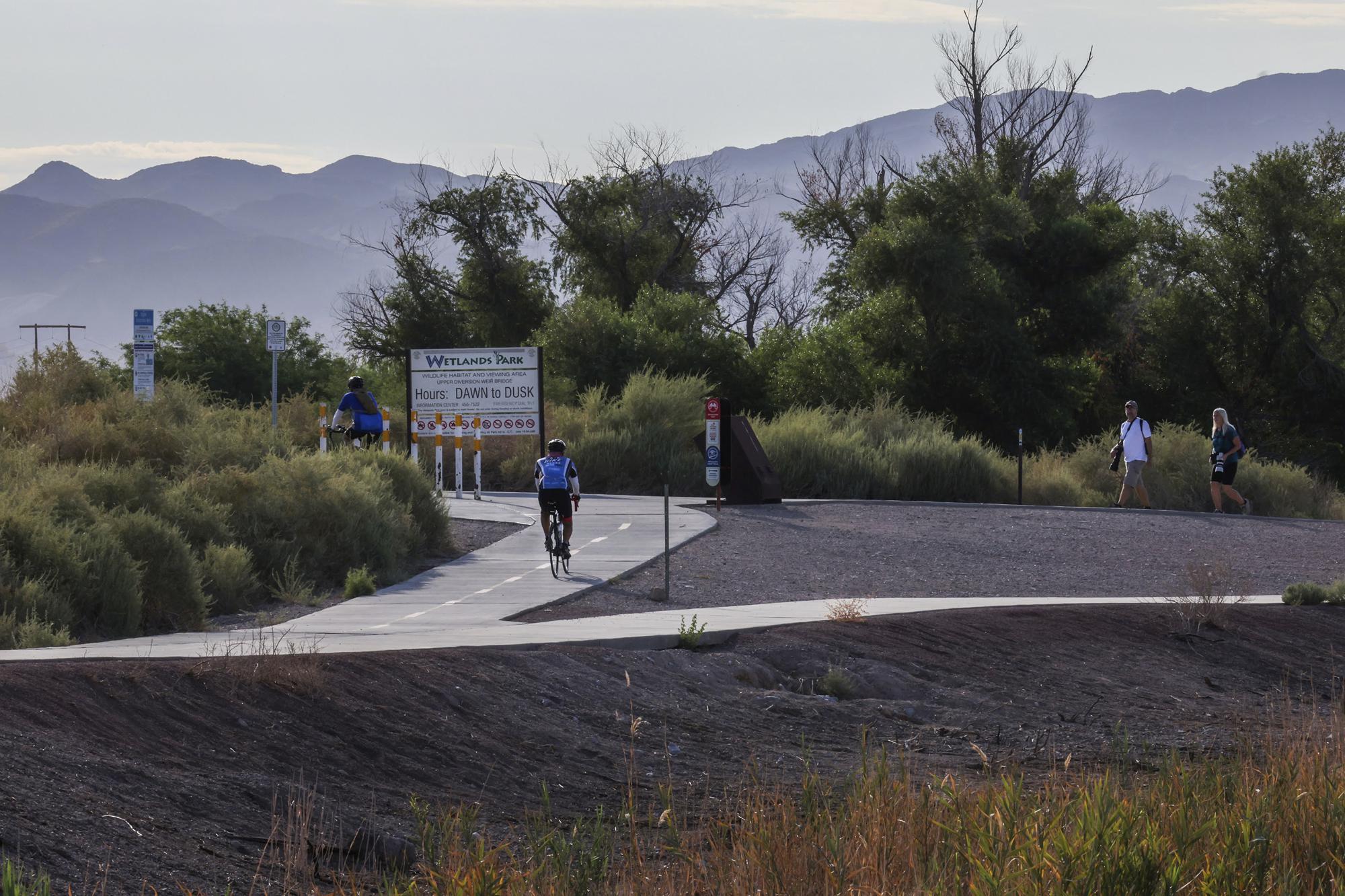 Nevada, even though it has a small slice of the Colorado River, has a huge stake in those talks. Las Vegas is reliant on the Colorado River. It’s the source of about 90 percent of the city’s water supply. The remainder comes from a local groundwater aquifer, which was historically overused.

Any other water in Nevada is far away.

For years, Las Vegas had looked to import rural eastern Nevada groundwater hundreds of miles away as a potential supply. But local water managers shelved the controversial plan in 2020 amid legal challenges and concerns about environmental impacts. While it still owns ranches in eastern Nevada, the water authority has said its focus is on supplementing its supply through collaboration, including a recycling project in California.

How Southern Nevada has managed to grow, thus far, on such a tight supply has everything to do with the Las Vegas Wash, which empties into Lake Mead. Colby Pellegrino, deputy general manager of the Southern Nevada Water Authority, described the natural stream as something of a “a silent miracle.” The wash enabled Las Vegas to scale-up one of the largest municipal water recycling programs in the nation — and increase its Colorado River share by about 85 percent. 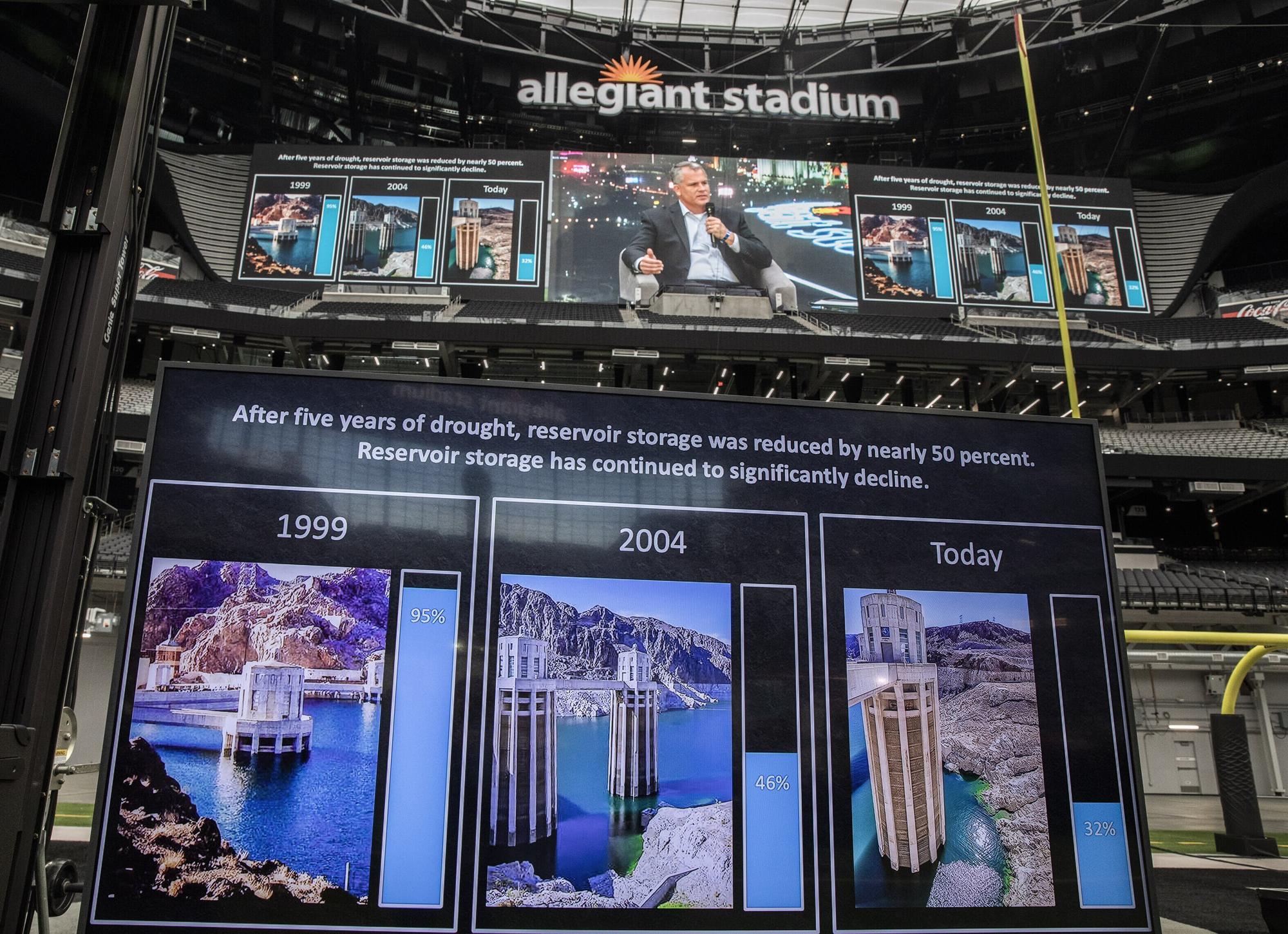 Because nearly all indoor water in Southern Nevada is treated and returned to the wash, it has allowed Las Vegas to focus its conservation efforts on aggressive turf removal. This, combined with water recycling, has meant that Nevada has under-used its Colorado River apportionment.

As of Aug. 29, the state was forecast to use about 241,490 acre-feet of water, about 20 percent less than its 300,000 acre-foot allocation. Nevada, as a result, can easily absorb an 8 percent cut to its water supply next year without any significant changes to municipal water deliveries.

As for future growth, Pellegrino said “it depends on how we grow.”

“The future of our growth has to have the smallest water footprint possible,” she added. 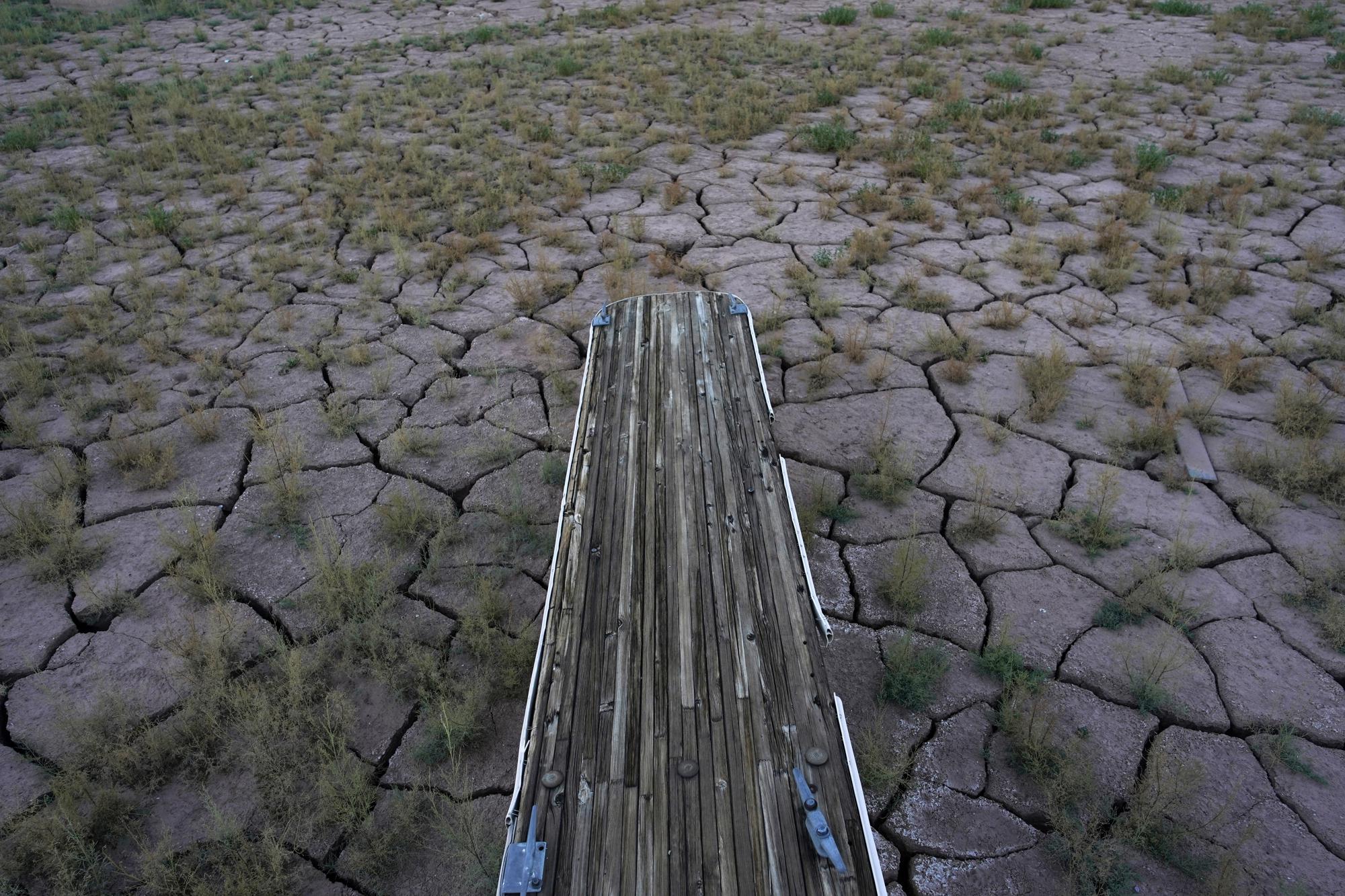 But with only 1.8 percent of the Colorado River, Las Vegas cannot fix the problem on its own. In a recent letter, water authority General Manager John Entsminger called for swift cuts aimed at stabilizing the Colorado River’s reservoirs while longer-term agreements can be negotiated. The water authority has also led on pushing states to incorporate climate change in their planning.

Hiatt, on the Las Vegas Wash Coordination Committee, came to Southern Nevada in the 1970s, when the population of Clark County was about 350,000 people. He said he is concerned about what a future might look like as climate change continues altering the river’s flows. If conserved water is only re-dedicated to new growth, he worries “we’re going to be in the same position of pushing against our allotment — and our allotment may be significantly lower than it is now.”

“It’s hard to believe anyone is going to come out with more water,” he added.

EDITOR’S NOTE: This is part of a collaborative series on the Colorado River as the 100th anniversary of the historic Colorado River Compact approaches. The Associated Press, The Colorado Sun, The Albuquerque Journal, The Salt Lake Tribune, The Arizona Daily Star and The Nevada Independent are working together to explore the pressures on the river in 2022.